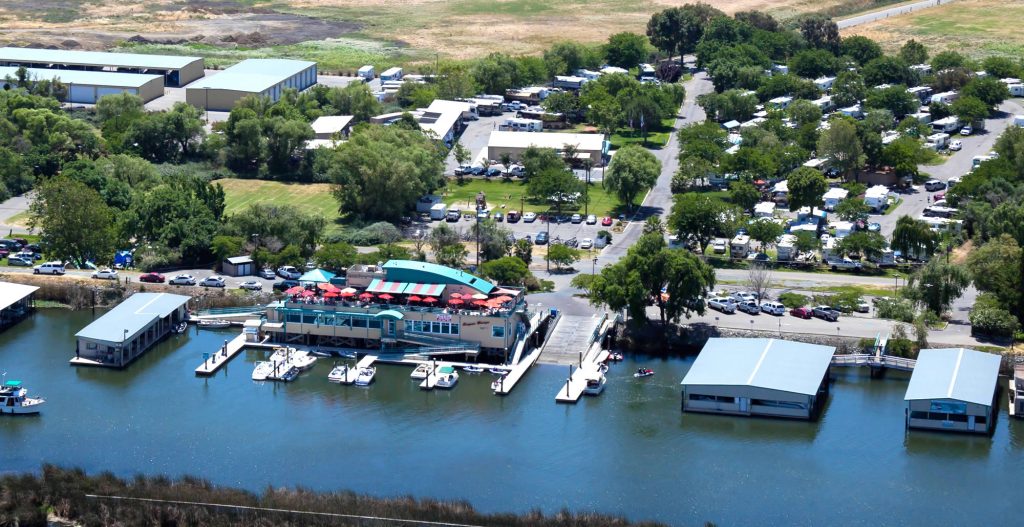 We frequently get asked how we arrived at naming our resort and marina "Sugar Barge". As with anything unique, there is quite a story to tell.

Our Restaurant, Bar and Resort are named for a legendary cargo vessel which was moored on this very spot for many years. The "Sugar Barge" was built in 1925 at Stone's Shipyard in Alameda. It was christened "South Shore #1" and made cargo runs between Redwood City and San Francisco hauling general freight.

In 1942, it was purchased by River Lines Co. and continued to carry freight between Vallejo, Oakland and San Francisco. Bay and River Navigation Co. purchased the "South Shore #1" in 1945 and renamed her "M. V. Mokulii". In addition to a San Francisco Pier #1 run, she also delivered sugar to railheads in Richmond and Oakland. It was at this point in time that she became know as a sugar barge.

Needing a green pasture to retire to after many tireless years of plying various waterways, the "M. V. Mokulii" was purchased from C&H Sugar by the Joseph Family. At Bethel Island, she was permanently moored and began a new life as a snack bar. In 1969, she was purchased by Paul Keeney, Lenny Gomes, and Harry Norager. She was given a major facelift and became known as the "Sugar Barge Restaurant and Lounge".

The Sugar Barge had two decks with a bar on the lower level and dining above. Perhaps the most memorable feature was the bilge pump. When the unreliable old pump failed, the vessel would start to take on water. The customers were promptly asked to move upstairs for a few complimentary drinks. Thank goodness she was in relatively shallow water.

The old girl sank twice, putting Lenny and Paul out of business. They were fortunate enough to sell her to Western Waterways who towed her to Holland Tract with the intention of remodeling and reopening her in all her original glory. As is often the case, bureaucratic red tape prevented this dream from becoming reality. With the best of intentions, they kept her afloat for a while, but now, regrettably, she sits at the bottom of the slough ... where at high tide she fills up with water and sea life, not patrons.

For the many years she called this location home, local folks referred to this section of Bethel Island as Sugar Barge. With all the memories and stories to tell from the old days, we just had to keep the name ... minus the bilge pump, of course! This way she will continue to live in memory.